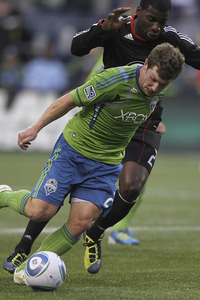 I’ll start with the first, and worst, of the bunch. Mr. James Riley. He started the season a fan favorite, and his game play seemed to earn that. He had solid passes, a great running game, and seemed to be a great part of our defensive lineup. He moved quick, and as Chevy Chase said, he had his “eye on the ball.” I can’t pinpoint exactly when it happened, but it seems to have been near the start of Summer.  He started missing people on passes. His crosses were winding up at the feet of the opposition. He wasn’t running as fast to get to the ball, and more and more he was just plain not receiving passes sent his way. He was being out-maneuvered by players that he should have been able to treat like school children. What was happening?

Honestly, I have no answer. Something, some spark of glory in him, died. He has spent more than half the season gradually pulling the team down. Now, I’m not saying he’s solely responsible. That would be heavy-handed of me, at best, and at worst it would be rude and just plain mean. He’s a great guy. A solid member of the community. But he’s just not… Rave Green. He’s more of a Lime Green. He wants to be Rave, I can see it… but he doesn’t want it as much as he once did.

First Key to the Match: Put Riley on the Bench. He’s had a good run. Give him a nice rest.

Which brings me to Defense. The Sounders continue having this horrible mentality of “Wait for the ball to get to me.”, when they should be saying “How fast can I get to the ball?” The teams we face aren’t as good, and yet they out-pass us on a regular basis, and worse, they snatch our passes like an NFL star receiver intercepting the ball in a kindergarten game of catch. What’s this mean to our defense? It means that when a team, such as RSL, runs the field toward our goal, they’re able to cleanly pass to each other, and we have maybe 4 players on the team who try to get in the way of the ball – and none of those players are in our back 4. Wahl has moments of greatness, but most often that is when he’s playing farther up the field. Evans seems to be great at the same rate as blue moons. Leo has a bizarre penchant for trying to be the Muscle, and fails on the finesse. And Riley… is Riley. To be sure, these aren’t our only defenders. But they are fairly common.

Second Key to the Match: Kasey can’t do it alone. Choose strong defenders to guard the net, and have them work on not just jockeying for position, but outright taking of the ball. Steal those passes, stop those runs. Get in the Way. You might get a soccer ball in the Protector, but that’s what its for. Man up and Defend. It’s your job.

And now we talk about Offense. Looking at the RSL game, it’s hard to see how we did much more than deliver the ball to RSL’s defense so they could send it back down field. An abysmal shots-on-goal record, and where were those set pieces we’re so well known for? A game full of mediocre attempts to get to the box, generally ending in RSL snatching the ball away and heading back towards Kasey. Where was the Drive? Where was the Passion? This is a team known for last-minute victories, end-of-game comebacks, overage-time scoring. Was RSL so far above us that we just couldn’t pin the ball to the net? Hardly. They just dominated the game when Seattle played their weakest.

The terms that come to mind for me from that match are: Passing Game; Trapping; Marking Targets; Momentum.

The passing game was weak. Like the defenders, the wings and forwards seemed to be more than willing to stand where the ball would come to them. And RSL seemed more than willing to run right through that rolling path and snatch the ball away. The boys in Green acted like a children’s soccer team and…

No, scratch that. They day AFTER RSL put a fresh coat of shellac on the Sounders, I watched a children’s soccer game. Twelve year old girls, battling it out on the greens in Capitol Hill. Intercepting passes, following the ball like sharks following a wounded seal. No waiting for the ball to come to them. No. Running TO the ball. Making those passes happen instead of waiting for them to happen.

So, the Sounders played worse than a bunch of twelve year old girls.

Third Key to the Match: Clean Passing and Trapping. Solid Drives and Taking Shots. The ball isn’t going to knock itself down field and toss itself into the net, boys. It needs help.

And finally, the one you’ve all been waiting for. The Rut we’re all guilty of, fans and players alike.

We all love him He plays like a man possessed. He manages to hold onto the ball even when people are tossing him around like a hot potato. He stays standing like a crazed Weeble Wobble through tackle attempts that would stagger and drop most players. His speed, agility, and eye on the other players is almost legend at the CLink. He cries Rave Green tears of joy, and sweats the cure for the common cold. He walks on water and breathes fire. He knocked out Chuck Norris with a nutmeg and shoulder-check.

Wait a minute. Are we talking about a Soccer Player, or the Son of God?

Mauro is a big problem for the Sounders. The team’s game-play elevates when he walks onto the field. They just plain do better when he’s in the match. And that’s the problem. If they are able to play better when Mauro is in the starting eleven, or subbed in during the match… Why can’t they just play that well all of the time? They clearly have it in them. Even Riley’s skills seem to come to life when Rosales is there. Jaqua becomes a force to be reckoned with when Mauro takes the pitch.

Why aren’t they playing that way all of the time?

There’s nothing I would love better than to see Mauro Rosales play and drive us to a win tonight. Wait – I take that back. There’s one thing: I would love to see the Sounders play as well without him as they do with him. I would love to see the level of game-play not be affected in the least when Mauro is subbed in in the second half. I would love to cheer his running onto the pitch, instead of offering prayers of thanks to dark and mysterious deities for finally rescuing a run-down Sounders FC by sending the demi-god of Soccer to bail them out.

Fourth and Final Key to the Match: The Sounders need to play all the time like they play when Mauro is on the field. No one man should elevate the game play of a whole team. The game play should always be elevated. They are that good, all the time. They just need to play like it.

If you enjoyed this article, please consider sharing it!